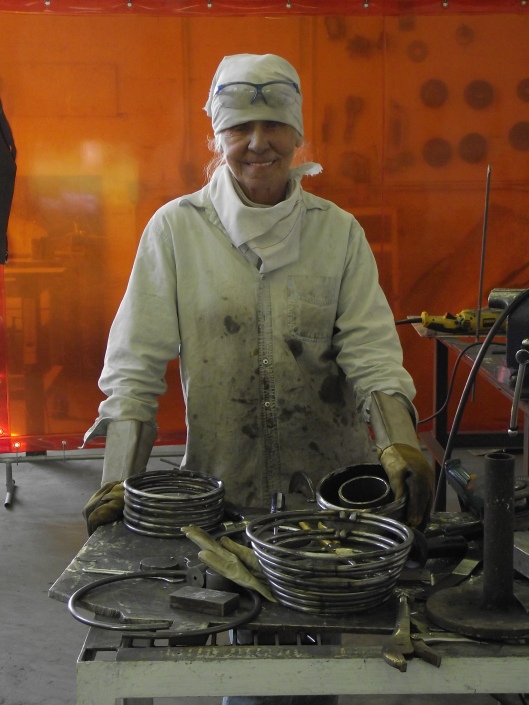 Chuckles in the Making

I recently came across this article written by Brian Brennan for Galleries West Magazine back in 2002. Everything the writer says about Katie is so spot on and still relevant today so I thought to post it here in its entirety.

For the past 40 years, the sculptor Katie Ohe has been quietly and tastefully endowing Calgary’s public places, galleries and private collections with dynamic contemporary sculptures that seem to have been surreptitiously crafted by an artist named Anonymous. Because she often puts only her last name (in small letters) on her public art—and sometimes omits it entirely—Ohe has avoided the modern tendency to brand herself as a cultural celebrity, and instead has let her work speak, boldly, dramatically and eloquently, for itself.

“Katie is an abstract sculptor of wonderful spirit,” says Alan MacDonald, the information director at the University of Calgary, where a few of Ohe’s most popular public pieces are on permanent display.

“Her strength and artistry produce a different, mysterious magic, through sophisticated sculptures that are inviting and human in scale.”

One of the first artists to make abstract sculpture in Alberta, Ohe (pronounced Oh-ee) has been influential both as a teacher and as an artist. Her career-long affiliation with what is now the Alberta College of Art and Design began in 1954 when she was a 17-year-old art student and has continued since she became a part-time sculpture instructor there in 1970.

Born Katherine Dorothea Minna von der Ohe, the daughter of German immigrants, she was raised on a farm near Peers, Alberta, just east of Edson, and she knew from an early age that she wanted to be an artist. “I had no idea what an artist was, but that was what I wanted to be,” she told the Calgary Herald in 1976. A fortune-telling neighbour predicted Ohe would achieve her ambition “and I truly believed her.”

Ohe waited on tables to pay her tuition at the Alberta College of Art and, by her third year, she was “passionately involved with sculpture.” She learned from her Calgary teachers about working with wood, clay and ceramics, and broadened her range when she travelled on scholarship to New York and learned about welding, metal spinning and other industrial techniques used in the fabrication of modern sculpture. “Within her first month, we recognized that she was an exceptional young sculptor,” said her New York teacher, Dorothy Denslow.

When she returned from New York in 1962, at age 25, Ohe received her first major commission: to carve a wooden pulpit, communion table and baptismal font for the chapel at Calgary’s Grace Presbyterian Church. This was followed, in 1963, by a commission to make a concrete mural depicting the banishing of Lucifer from heaven, for the east wall of  St. Michael’s Roman Catholic Church in Calgary. Ohe worked 70 hours a week for four months to complete this semi-realistic, 20 ft. by 6 ft. project, then the largest of its kind ever done in Calgary. (It has since been dwarfed by Ohe’s concrete mural, Canada, located in the foyer of the Geological Survey of Canada building, adjoining the University of Calgary Research Park.)

After a second trip to New York in late 1963, Ohe decided to settle permanently in Calgary. The city nourished her creatively and there was plenty of work available for her, both as a sculptor and as a teacher. Her students included the Toronto-based sculptor Evan Penny, who now makes a successful living creating special effects and prosthetic makeup for Hollywood movies, and Vancouver artist Claudia Cuesta, who remembers Ohe as “a remarkable woman, very inspiring.” Calgary artist Carroll Taylor-Lindoe, who studied with her as a teenager, says Ohe’s teaching and art were always inseparable, and both were an extension of her personality: “Art isn’t something that Katie does, it’s who she is. Her teaching is like her art; it comes from the heart.”

In 1964, Ohe established a combined work and living space in an old carriage house (triple garage) on the grounds of a Coach Hill mansion owned by the wrestling patriarch Stu Hart, and that became her base of operations for the next 14 years. “No matter who lives there, everyone still calls the little carriage house Katie’s place,” wrote wrestler Bret “the Hitman” Hart in his Calgary Sun column in July 2000. “There’s some significant, indefinable thing about Stu teaching guys the art of wrestling in the dungeon (basement), with all its brutality and brawn, while a few steps across the driveway, Katie saw the gentle beauty of the world and found joy in sharing her art.” Ohe lived there until 1968, when she married fellow artist and teacher Harry Kiyooka, and she continued to use it as a work space until she and Harry built a combined home and studio on the western outskirts of Calgary.

During the 1970s, Ohe began making sculptures with moving parts. “I want to do something with natural movement—by the breeze or by touch,” she said. A characteristic example of this work was Zipper, a seven-foot kinetic steel sculpture installed in the main foyer of the University of Calgary’s science complex in 1975. Shimmering and playful, it has become one of her best-loved pieces. The shiny surface (the chroming was done at a local automotive refinishing firm) is smeared with handprints from the hundreds of students who set it spinning daily. “All who pass it are compelled to touch and manipulate,” says Alan MacDonald.

Ohe’s latest kinetic sculpture, Janet’s Crown, was made in memory of Calgary painter Janet Mitchell and unveiled this spring on the lawn at the south entrance to the College of Art. Encircled by reflecting stars that capture what Ohe calls “pools of sky,” the five-pointed crown sits in a cauldron-sized metal hemisphere that revolves gently like a carousel in a children’s playground. Other examples of Ohe’s public art can be found in Calgary at such places as the Bethany Care Centre, the Calgary Board of Education building, a community park in the Bankview district, and at Prince’s Island Park where a weather-beaten duet of stone cylindrical shapes called Night and Day directly north of the Eau Claire shopping mall.

Serious recognition for Ohe’s work has been slow in coming. During the 1960s and early 1970s, she attracted a lot of press attention but only, it seemed, for the novelty of a young female artist working with heavy materials. This began to change in the mid-1970s when she was featured in a series of solo shows in Calgary and Edmonton, and culminated in a major retrospective exhibition at the Illingworth Kerr Gallery in 1991. “Now it is possible to fully consider the nature of Katie Ohe’s art and to write her name in bolder letters,” wrote freelance art curator Katherine Ylitalo in the 1991 exhibition catalogue.

Since then, Ohe has been selected by two gallery professionals, Christine Sowiak of the Nickle Arts Museum and Jacek Malec of Triangle Gallery, for their top-five lists of the most significant Calgary artists of the past 50 years. And, in June 2001, at age 64, she received an honourary doctorate from the University of Calgary. “She has inspired and influenced a host of Canadian sculptors and artists,” said the accompanying citation. “Let us honour the consummate artistry of one of Alberta’s finest.”

Brian Brennan is a Calgary author, journalist and broadcaster who has written extensively on the arts. His new book, Scoundrels and Scallywags: Characters from Alberta’s Past, will be published by Fifth House in October, 2002.